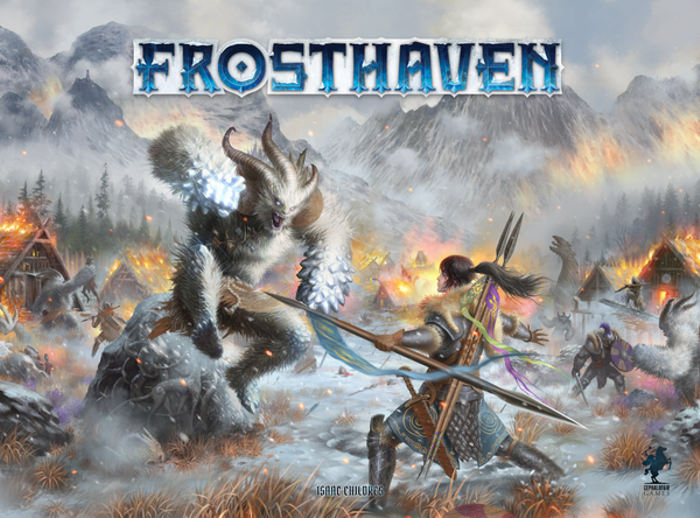 So why Frosthaven? Well, that is the name of a small outpost far to the north of the capital city of White Oak. There, a group of mercenaries at the end of their rope will help bring back this settlement from the edge of destruction. Not only will they have to deal with the harsh elements, but there are other, far more dangerous threats out in the unforgiving cold as well.

There are Algox, the bigger, more yeti-like cousins of the Inox, attacking from the mountains, Lurkers flooding in from the northern sea, and there are even rumors of machines that wander the frozen wastes of their own free will. The party of mercenaries must face all of these perils, and perhaps in doing so, make peace with these new races so they can work together against even more sinister forces.

Designer Isaac Childres just announced on #Frosthaven's Kickstarter page that with the high demand for scenario books in lieu of map tiles, they will be making the following decision:

Here's the link to the update where Isaac also runs through the pros and cons of a scenario book.

Now here's a question: For those who have been hesitant to get Gloomhaven or Frosthaven, will this push you over the edge?

Can you imagine any other board games coming close to this amount in the near future? By the way, about 12,000 people backed at the $1 pledge level. Did anyone here back this?

Who wants to win some Frosthaven?

There are 6 Giveaways going on now for #Frosthaven !

I have been tinkering with the Frosthaven characters on Tabletop Simulator with a buddy of mine for a few quests.  We just started a new one after completing the first one we tried with the Banner Spear and Necromancer.

On our second run we are using the Drifter and the Shadowstalker.

It's hard. Harder that Gloomhaven and the characters come with a much higher complexity that that of Gloomhaven.  I love it and look forward to playing the actual game for sure.  On the other hand, I would not recommend this game if someone were trying to decide between Gloomhaven and Frosthaven.  We are certainly tinkering in the beginning stages but having completed Gloomhaven I thought this one would be easy to jump into and Isaac has certainly presented some significant challenges to look forward too!

I've heard rumors that #Gloomhaven is a decent game. Good, even. Apparently, it's ranked #1  on BGG. Welp, Game and Party are giving away a copy of the sequel, #Frosthaven! How cool is that? Here's the link:

Note that that is a referral link, so if you enter using it, I will get another entry. Feel free to use the link, remove the attribute in the url that makes it a referral link, and then load it again if you'd rather not give me more entries. I got your back. ✌️

I hope one of you win it!

Many apologies if someone has posted this already.  I got excited though as one of my gaming buddies started a TTS Frosthaven game and I started to pick my Necromancer cards this morning.  It looks like there are four Jaws of the Lion characters as well that you can play with on the simulator.

[Gloomhaven: Jaws of the Lion, Frosthaven]

Frosthaven's new features: 7 things we're excited for in the sequel

I mean, apart from 16 new characters and a new campaign book filled with 100+ scenarios, and a whole new app that allows for your campaign to be voiced by professional actors

A co-operative dungeon crawler based on euro-style mechanics, Frosthaven is the sensational follow up to the smash hit Gloomhaven, a 22 pound box that's sold a quarter million copies.

Like Gloomhaven, Frosthaven is a big game, and you may be deciding whether or not to plonk down a cool hundred for the base box. Here are 7 things that are new to Frosthaven that set it apart from the hit original.

Whether this is a pro or con is up to you, but Frosthaven is clearly trying to set itself apart from the newbie-friendly Jaws of the Lion set (approx $40 MSRP) which is set to release later this year.

The six new starting characters feature a teleporting melee assassin, a necromancer who sacrifices health for summoning, a shapeshifter who has two entirely different decks of cards, a spearmaiden who requires very specific positioning to her allies to pull off cool combos... you get the drift.

Gloomhaven's unlockable heroes slowly ramped up the complexity from its starting six, and it seems like Frosthaven has let designer Isaac Childres let his imagination run free from the start.

Frosthaven comes with a new puzzle book that allows players to really lean into the exploration and unlockable aspect of the first game. While Gloomhaven came with 3 sealed envelopes for players to discover, Frosthaven has more than 20. If you enjoy opening new things to alter how your game plays, this part of the game just got a lot bigger.

Weather and the passage of time

Timed scenarios were an aspect of Gloomhaven that the designer wanted to add; demons attack the town! deal with them before they rampage over everything! but he couldn't find a way to make tracking them not a complete pain.

But now in the frozen north a solution presented itself. Summer and Winter will pass as you journey through the game; when time has passed 15 times, the season will change. Winter brings significantly more dangerous threats - a new, more challenging journey deck, attacks by enemies, the closure of certain shops and buildings in the town...

Wait, Calvin, I hear you say. Shops and buildings?

The town of Frosthaven can be built up by the players using resources found during their dungeoneering. An example given was the smith, which allows players to craft new weapons and items, and a herbalist who can brew potions. Players must choose which buildings to help construct, which leads us to:

Gold holds less meaning in the frozen north - here raw resources hold sway. Instead of looting just money from scenarios, the game now has custom resource decks (that change based on which scenario you're playing) to see what you can loot from the dungeons.

These resources can be used in town to construct buildings or craft items; you can also loot items directly from the resource deck. Perfect for those who felt like the looting system of Gloomhaven left a lot to be desired.

Character unlocks also happen through buildings - if you construct certain buildings, one of the game's 10 unlockable characters will be attracted to your town and unlock for you.

A lot of Gloomhaven's missions boiled down to 'kill all the monsters', which made for an awesome dungeon crawl but less of a story based affair. Apparently Frosthaven will shake this up; obviously we don't know any of the scenarios yet, but the mind leaps to escort missions, protect missions, or maybe even heist missions. The more variety the better!

You can check out the Frosthaven campaign for the next 30 days on Kickstarter to see whether this game is right for you.

Frosthaven Kickstarter Has Over $2.7M in Less than 6 hours