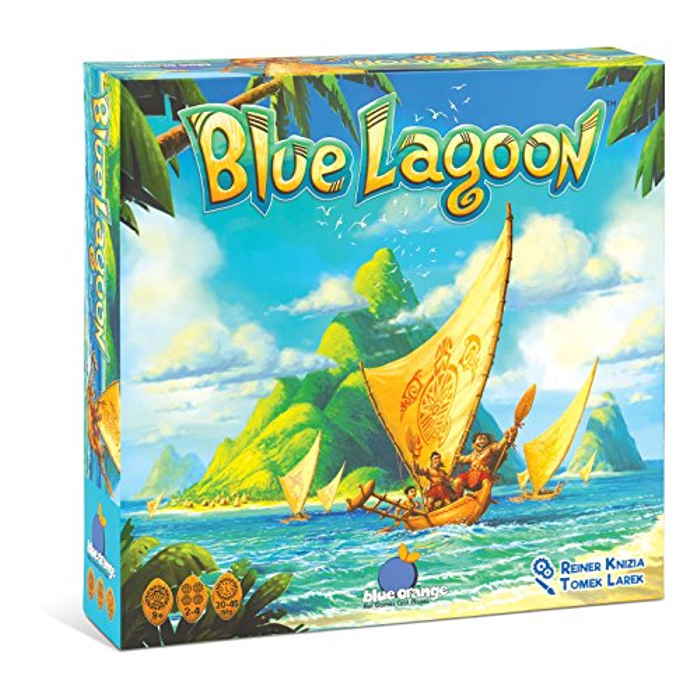 Blue Lagoon is a set collection game with an area control mechanic. Each player manages a group of settlers that spread out on the islands of a newly-discovered archipelago, discovering its wealth and building villages as they explore. Points are awarded for collecting resources and colonizing the islands. Smart placement and anticipation are needed to win.

Blue Lagoon: Become the Most Renowned Tribe on the Archipelago Blue Lagoon by Reiner Knizia is a colorful game for 2 to 4 players that plays in about 45 minutes. Players are on an expedition to claim and then settle the islands of a recently discovered archipelago. You won't be able to travel everywhere, so you must balance visiting many islands with creating majorities on an island, and completing sets of resources with having multiples of one type.

Opening the box for the first time, there is an instruction booklet on top of a sheet of discs. Looking closely at the top right corner, we see a cutout to make it easy to get the sheets out of the box.

Both sheets of cardboard components have this cutout. A very thoughtful touch.

Under the sheets of player discs, there is a nicely illustrated map, folded and held in place by the custom insert.

Beneath the map we see the rest of the insert, with a drawstring bag, wooden components, and a score pad. The four cylindrical spaces are just the right size for the cardboard discs.

Unpacking the wooden components, we find six each of the resources (coconuts, bamboo, water, and precious stones), eight statuettes, plus five villages in each of the four player colors.

The wooden villages even have tiny little door details.

The resources and statuettes are put into the bag and mixed. One by one they are randomly placed onto the game board where there is a circle of stones.

Just leave the score pad nearby for players to reference, and that's it! You're ready to play.

Blue Lagoon is played in two phases, the Exploration Phase and the Settlement Phase.

Each turn players add one settler or village to the game board. To add a piece the board, it must be next to a previously placed piece, unless it is a boat placed into water.

When you place a piece onto a hex that contains a resource or statuette, you take the item into your supply.

The Exploration Phase ends when all of the resources have been collected or when all players have placed all of their settlers and villages onto the board.

Players score for having pieces on 7 or 8 islands, linking islands, having the majority on an island, having 2-4 matching resources, having all four resource types, and having statuettes.

After recording the scores from the Exploration Phase, all settlers, resources, and statuettes are removed from the board, along with any villages on a space with a stone circle.

The Settlement Phase ends when all of the resources have been collected or when all players have placed all of their settlers onto the board. Scores are tallied like before, and the points are added to each player's score from the Exploration Phase.

Blue Lagoon is a very approachable game that won't scare away casual gamers, but offers plenty of strategy for hobby gamers. It's the sort of game you can play with your parents after a family dinner, or as a game that's quick to set up and teach at a game night. Knizia fans will likely see some similarities to Through the Desert.

Because there is only one action per turn, the game moves quickly with minimal downtime. If I could add one thing to the game, it would be player reference cards to remind everyone what will be scored.

The box is a standard square that fits easily on shelves, and it has a very reasonable price point, especially considering its pedigree and custom wood components.

If you like your network building with a dash of set collection and area majority, and you want it in under an hour, take a look at Blue Lagoon.