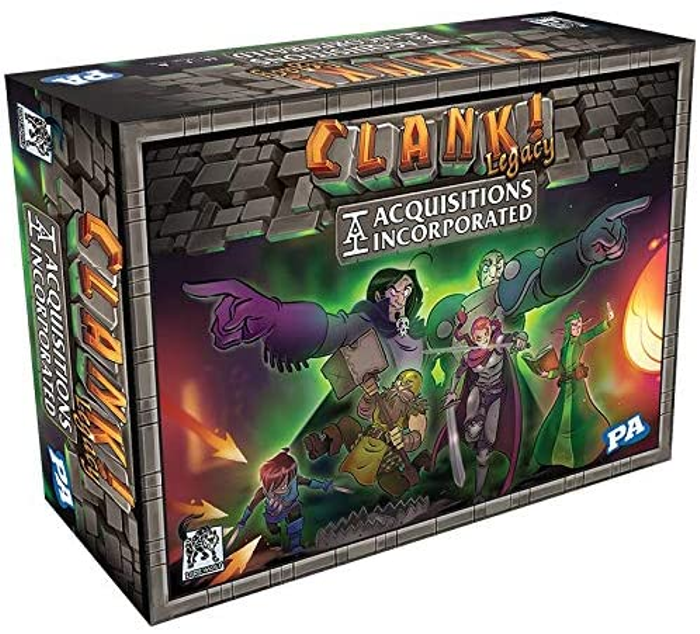 Clank! Legacy: Acquisitions Incorporated extends the deck-building fun of Clank! with legacy-style gameplay! Found your own franchise of the legendary adventuring company Acquisitions Incorporated, and shepherd your fledgling treasure-hunters to immortal corporate glory over the course of multiple games. Your game board, your deck, and your world change as you play to create a unique campaign tailored to your adventuring party. Be cunning, be bold, and most importantly be ready...

Here's your chance to win a copy of #Clank! Legacy: Acquisitions Incorporated!

What's your interest level on this game? If you're curious about my experience with it, you can read it here.

It took a while but my wife and I finally got around to starting the campaign! I'll be mentioning the names of some of the components throughout the writing below, but I'll be sticking to big picture thoughts instead of getting into the details so that I won't spoil anything.

For those who don't know, Clank! is a lineup of deck-building games where players must race through a dungeon (or some other type of maze-like area in the expansions) fighting monsters and securing loot, all while building up a deck full of powerful cards you can buy throughout the game. This all seems fairly straightforward but the catch is that many of your actions cause noise in the dungeon and generate "Clank! cubes." And whenever there's an event causing the dragon to attack, the Clank! cubes generated by all players are thrown into the dragon bag (which starts with 24 black cubes), and you draw a number of cubes matching the amount shown on the "rage track." Every time a player's cube is drawn from that bag, that player's health is dwindled and will mean game over if you're knocked out of the game and don't have an artifact or if you're in the danger zone.

Here are our first impressions:

(++) The first thought that came to mind is "Wow, this was a steal." I got this after @BenjaminK posted that it's on sale for $52 on amazon. Considering the nice minis (and I'm not even a mini guy), great insert, the general component quality, and the amount of content available (10 campaigns and after you're done, you have your very own custom Clank! game to play without the legacy portion), I'm very happy about my purchase.

(+) Rulebook is relatively short and easy to understand. No instances of "what if's" came to mind. If you've played other deck-builders like #Ascension: Deckbuilding Game, you'll have an especially easy time going through the rules.

(+) Simple turns with good amount of decision space, and I always love that in games - You draw 5 cards from your deck and you must play all of them to end your turn. Each card has a number of Skills, Boots, or Swords and by playing them, you have a pool of these "resources" you can allocate toward a number of different actions such as acquiring new cards from the Adventure Row (which gets refreshed/restocked as cards get acquired), for movement, or for defeating monsters for gold or other benefits. I'm going to have fun testing out different strategies!

(++) Adventure - I enjoy #The Voyages of Marco Polo, but I wish it actually felt like a voyage. And whereas your choice of which path to take in Marco Polo is mostly based on your hidden end goal destinations and your pool of resources, Clank! Legacy actually makes you want to explore just for the sake of discovery. Many of the spaces reward cool bonuses and trigger looking into the Book of Secrets to advance the narrative, so I often wanted to take a longer, less straightforward path just so that I can experience more of the game.

(++) Book of Secrets - There are a number instances when a player triggers looking up the book. It reminded me of my middle school days when I had this book where each page presents you with different choices and your decision leads you from one page to the next. The Book of Secrets captures that type of fun where you're filled with anticipation and wishing that nothing bad will happen when you're so close to the finish line. Well written with a nice touch of humor, engages the players especially as the gameplay progresses, and it doesn't feel cliched or like it's a bother.

(+/-) Legacy Upkeep - I was a bit concerned about 15 minutes into the game. Our table space was already about full and I was doing a bit of gymnastics juggling between the Book of Secrets, the Cardporium (where you sometimes have to retrieve cards that get added into the game through an event), and getting the appropriate stickers to put on the board, etc, all while trying to make it a smooth process so that my wife is enjoying it. It felt like all these pauses would kill the momentum of the gameplay, and even though the amount of upkeep persists throughout the game, you do get used to it. Plus, we got used to the rhythm of the game and my wife and I got into a groove of each of us sharing a part of the upkeep. Also, the Book of Secrets and all these mystery elements do a great job of pulling you into the game and making you invested and curious, to a point where you're just looking forward to seeing what will unfold. I do think that if the players are relatively inexperienced, then I think it's very important that at least the owner of the game maintains an enthusiasm for all of this so that it keeps everyone motivated and patient especially in the beginning of the game. It paid off for us, and it's cool to see the board itself and even the rulebook slowly transforming into our own custom version.

(++) Luck - There are many elements of luck in this game, and I love it. First, there's the suspense of pulling out the Clank! cubes and not knowing how many hits you'll take from the dragon. Then there's the Book of Secrets where you have no idea what will happen and which can have severe consequences for everyone, whether for good or bad. Although I like elements of luck in the first place, I think I mind it even less because (1) it makes it feel more real to life, and (2) it leads to a much more memorable story.

You can check out the link for more info, but here's a quick rundown:

Who's interested? It's pretty unlikely for me to get it since most of my game sessions are with 2 players, but I could see how this would be a great option for some of you! What do you think @BenjaminK?

I ordered this from Walmart a while back when @BenjaminK shared about the deal on Amazon (I couldn't find it on there for some reason but I saw Walmart offered the same discount). Can't wait to break this out! Hoping to try it out with my wife this weekend. Oh and I'm pretty sure this is the largest box I own (17.7x13.3x.4.4")

Picture taken at my son's crib after his nap.

Amazon has a killer, nearly 50% off sale of Clank! Legacy. I was saving my gift card balance for Imperial Assault, but I honestly couldn't pass up this offer. Free shipping, too (for those of us without Prime). I love Clank! and I love legacy games, so I know I'm gonna love this one. Just an FYI to anyone considering getting it, now is a good time (especially if you have balance on your account!).

Clank! Which game is best?

I own Clank! the original game.  I am debating trading it in and getting another Clank! game.  There are so many versions out there and I've been told Clank! in Space is better than the original.  How many other versions have other's played and what are you're opinions on the expansions vs the original game?