Board Games by PvP Geeks

These are the board games published by PvP Geeks.

Skytear Review: A Board Game MOBA

by shelfside | updated 16 days ago

2 | 3 comments | [+]
Skytear is a 1v1 tabletop game inspired by MOBA's with gameplay that crossovers Magic the Gathering and League of Legends. Made and kickstarted by PVP Geeks, this board game features a map that includes two lanes (unlike LoL or Dota's 3 lanes), minions, and an expanding universe of heroes & champions; essentially MOBA gameplay at its core. There's even a powerful neutral monster, similar to Roshan in Valve's Dota or Baron Nashor from League of Legends. Board game components do a fantastic job of bringing the gameplay experience to life on your tabletop with minis for everything from minions to the characters you play. Meanwhile cards are an excellent primary gameplay mechanic as a means to strategize and outplay your opponent. Not only will you be controlling miniatures as units around a map like an area control war game, but you'll also be playing cards against each other not unlike instants and hand traps. Skytear is diceless, instead relying on deckbuilding and modifiers on its cards to great effect. Expansions are readily available to upgrade your collection of heroes, and with more cards come better decks and games, not unlike TCG's like Yugioh and Magic. This tactical MOBA-like card & minis game takes an incredibly unique space within our tabletop board game hobby, and the combos/strategies come together in an experience like no other board game. Resource and hand management meets positioning and tempo in a beautiful crossover mix of gameplay mechanics. There's inspirations and ideas drawn from so many different sources: destroying a nexus as a goal, but also additional win conditions, MOBA ultimates, Magic Counterspells, Hearthstone mana increasing every turn, attack modifiers like in Vanguard, the list just goes on and on. Skytear truly is a diverse love letter to so many different cultures of gaming!
Table of Contents:
0:00 Overview
3:34 Pros
12:16 Cons
16:05 Recommendations
21:21 Ashton's Personal
Score Support us on Patreon: https://www.patreon.com/shelfside
Purchase Games We’ve Reviewed! https://amazon.com/shop/shelfside
Shelfside Social Media:
https://twitter.com/ShelfSideYT
https://www.instagram.com/shelfsideyt/
https://www.facebook.com/ShelfsideYT/
Links to our other stuff:
Ashton's Channel: https://www.youtube.com/ashtonwu
Daniel's Channel: https://www.youtube.com/user/doyduh2 #
See Comments

No related posts or comments yet. 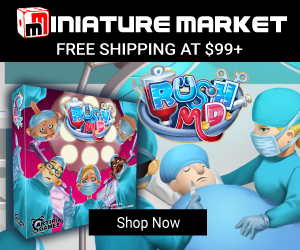 Rush M.D. is an innovative, real-time, cooperative board game that simulates the challenging and high-pressure nature of medical professions.
Visit
Giveaways