In CABO, you can swap and spy to make sure you have the lowest score at the end of the game.

CABO is a card game for 2 to 4 players that takes about 45 minutes. Throughout the game, players may peek at their own cards, spy on an opponent’s cards, or even swap to take a better card from another player.

When you think you have the lowest total card value, call “CABO!” If you’re right, you’ll get zero points for the round. Lowest score at the end of the game wins!

Cards are numbered from 0 to 13; there are four of each card, except the 0 and 13, of which there are two. Four reference cards and a score pad are also included.

The cards are shuffled, and four cards are dealt facedown to form a line in front of each player. The remaining cards are placed in the center to form a draw pile. One card is turned faceup to start a discard pile.

That’s it! You’re ready to play.

Each player looks at two of their cards, and puts the cards facedown again.

The first player can choose to take the faceup card from the discard pile, and replace a card in their hand with it. The card that was taken stays face up in their line of cards. This means that they have one less card to remember, but if it’s a tantalizingly low card, other players may try to take it. The card that was in front of them is discarded faceup.

Or, the player may draw a card from the draw pile. If they take it into their hand, it stays facedown so that no one else knows what it is. The card that they replaced goes faceup on the discard pile.

It may happen that the two cards you looked at during setup were both low cards (a 2 and a 3). The card on the discard pile is a 3, so you take it and exchange one of the two unknown cards in your hand. The card you discard could be a 1, or even a 0!

Likewise, if a player has a 3 faceup in front of them, and you use an early swap card to exchange one of your unknown cards, you could end up giving your opponent a better card. But there’s not always time to wait until you’ve seen every card, so sometimes you have to take a chance.

Some cards also have a special ability:

If you draw a card from the draw pile and discard it immediately rather than taking it into your hand, you may use the ability on the card.

Peek allows you to look at one of your own facedown cards.

Spy allows you to look at a facedown card belonging to another player. (You may know the value of a card that they do not!)

Swap allows you to take a card from another player and give them a card from your hand in its place.

If you have several cards in front of you that have the same value, you can exchange multiple cards at once.

Three sixes? Don’t fret. They can all be discarded together, making your total go from highest to lowest in the blink of an eye.

If you’re the type of card player who likes to shoot the moon, try ending the round with a “kamikaze” – exactly two twelves and two thirteens.

Risky, but if you make it, you’ll score 0 points, and each other player will get 50!

Once a player thinks they are in the best position (either from having the lowest value of their cards, or they have exactly two twelves and two thirteens), they can call CABO, and each other player will get one more turn.

If a player’s cumulative score is exactly 100 points, they may reset once per game to 50 points.

If a player has more than 100 points, the player with the lowest score wins.

CABO is a good mix of traditional card game concepts and modern updates. For example, Golf is a traditional card game where players exchange cards with the draw or discard pile to get the lowest score, but it’s played with standard card decks, and doesn’t have the artwork or special cards of CABO.

Blind 31 is an older game based on 31-style card games (where players try to get closest to 31 points). Blind 31 does not let players look at any of their initial cards, so you are fully in the dark.

CABO mitigates the blind play element by letting players look at two of their initial cards, and lessens the memory element by leaving some cards face up as the game progresses.

Calling CABO is similar to knocking in Elements, originally published as Khmer. Both games also have an element of bluffing. In CABO, if you peek at your own card and act very satisfied with it, or pretend to act horrified at the value of an opponent’s card, it may sway an opponent. You may cause them to make a swap that’s not to their benefit, or call CABO too early and receive the penalty. Or, some may prefer to play with a perfect “Poker face”, so that your opponents can’t read you at all.

CABO's fast setup makes it easy to bring out as a warm-up game for game night, or with casual gamers. Its small price yet quality publishing from Bézier Games (linen finish on the cards, original art) makes it good for gifting. Pick up a spare to leave behind at a friend’s house, or to have one for a stocking stuffer at the holidays.

The theme helps so much with these lighter games. Seems like a fun game I'd get if I actually had the right group.

I like games with a fast setup and fun art. 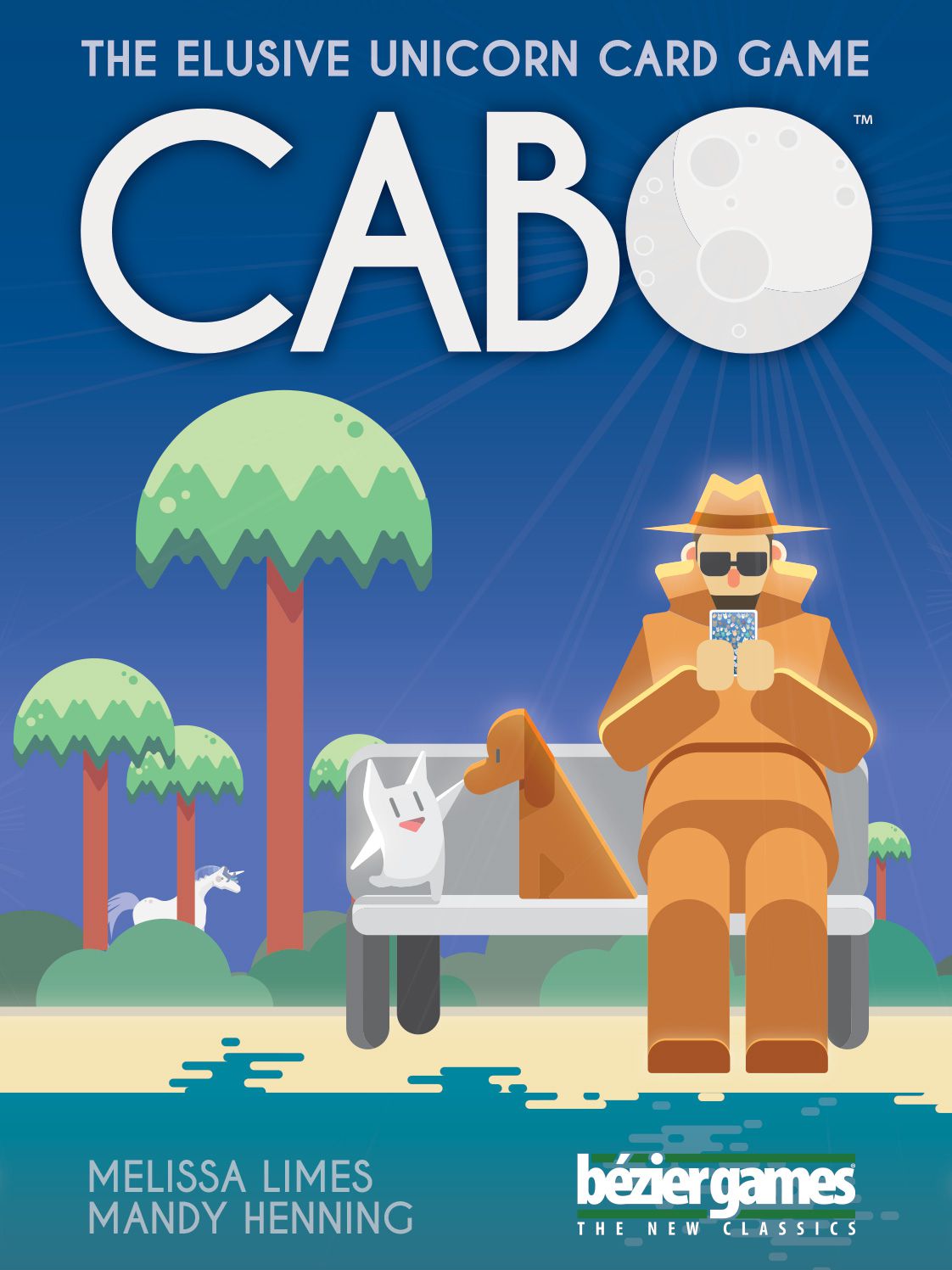