(1/10/2022) This is an automated weekly post to talk about the games you played last week.

#KLASK - After talking about it on the forum a bit, I decided to break this out again. Sarah and I were a little rusty at first, but eventually got our groove back. I think she was over it by the second game we played though lol.

#Adventure Games: The Dungeon - A user on the forum sent this to me a few months ago...I think @ClutchTheSword? and I finally got around to playing it with a friend (the shelf of shame contest thing I'm in certainly helped my motivation for playing lol). It was actually pretty fun and if I didn't JUST play it, I think it would be nice to play with Sarah as it's something I think she would enjoy. It took us quite awhile to finish the whole story. Some of that was due to my own stupidity not revealing a card as I was instructed, but we figured it out in the end.

#My City - Another game I broke out because of the shelf of shame contest motivation. I got this one from one of my many Secret Santa exchanges because I had mentioned I thought it would help get Sarah to like legacy style games. Or I guess just play one in general. Admittedly, I didn't do a ton of research on the game so I was pleasantly surprised to find it has almost a #Karuba bingo style mechanism. We played through the first 2 episodes and Sarah was really into it!

#The Quest for El Dorado - Continuing on my obvious Reiner Knizia trend, I got Sarah to play this with me last night. I know @theDL was asking for an update when I got to play with her so I'll say this: I got the elusive "that was fun" response from her! More Knizia will continue hopefully later today with a play of #Blue Lagoon with some friends.

Nice to hear Sarah liked Quest!  I still have not gotten my copy to the table. 😶

Hurry up and play it!

Glad you enjoyed The Dungeon. I, too, was really surprised by how much fun I had with the game. Out of the handful of small-box escape room style games I've played, it's my favorite one.

I haven't played very many but I think I agree lol. Thanks again!

Yay! Even more incentive for me to get it to try with my wife :)

This week was a good one for games:

#Wingspan - with Becky and a fella from our local gaming group

#The Belgian Beers Race - with Becky and two other local gaming buddies.  Four players was a nice sweet spot for this game.

#New Frontiers (BGA) - I've been enjoying this game on BGA and obtained it over the holidays.  I hope to get the physical copy to the table soon.  While similar to #Puerto Rico I think this game fixes a few flaws that Rico has and greatly enjoy the Race for the Galaxy theme.

#Air, Land, & Sea - I played a couple games with Becky and a partial game with Elijah.  This is great two player game!

#Teotihuacan: City of Gods - Played on BGA.  This remains one of my favorite games.

#Lost Ruins of Arnak - Final won another game of this on BGA.  I think it was against newer players though as Ifelt I was doing terribly.

In an effort to encourage my children to play games with me I created a 4 x 4 bingo board of 16 games.  Each potential 'Bingo' of four games played (across, down, or diagonal) will earn them a prize depending on the weight of the games played.  My son seems slightly motivated by this.  Not sure my daughter cares...lol

That bingo idea seems like something I'd do in the future lol. Echoing docker's question here, what are the games on the list?

I love the bingo idea...what are a) the ages of the kids and b) the type of prizes avaialbe?  what games did you put on the list?

I've only played 1 game of Feast of Odin and it took me about 2/3rds of the play to figure out what the heck i was doing.  Need to play again.  I like New Frontiers and Lost Ruins of Arnak but I've only played LRoA online.  I would really like to try Air, Land and Sea.  My BIL bought #Blitzkrieg! World War Two in 20 Minutes which i really enjoyed, are they similar?

I've never played #Blitzkrieg! World War Two in 20 Minutes and can't say how similar it is. If I get a chance I'll check out a video and see. 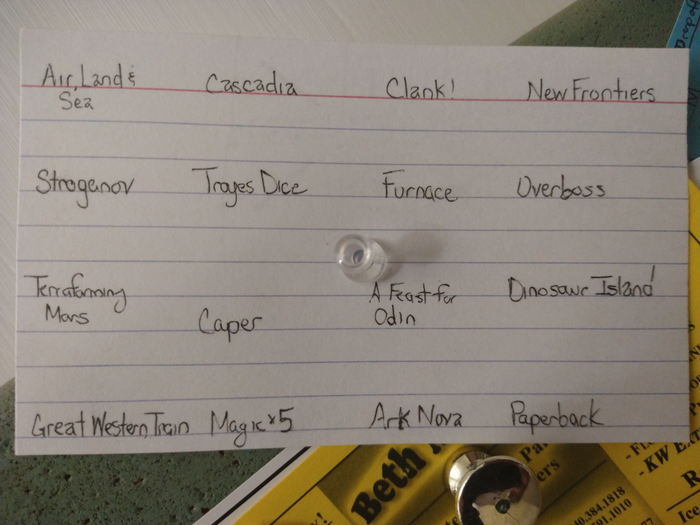 This is 100% something I would do lol

Daughter is 13 and my son is almost 11. I forgot I listed the prizes on the back. A box of candy for the lighter rows/columns and the heavier games have prizes like ice cream, a movie night, and black out (getting the whole card done) is a movie at Movie Tavern.

I'm assuming that's a combined play for your kids or do both kids need to be in each game?  My kids are 14 and 11 so roughly the same ages.  I could see something like this working for my boys.  The youngest would be especially motivated by some candy prizes :)

They can play individually or together with me and I give credit to whomever is playing and completes the game.  They will put the first letter of their name (E for Elijah and T for Taryn) next to the game afer they played it with me.  Once they get four in a row, they get a prize!

It's pinned to the corkboard under our family calendar and readily available.  If they are ever sitting around looking board I'll remind them, "You could play a gmae with me and check one off your bingo card?".

I'll do a post later this year if it works...lol

Sounds like fun!  Hope it's successful for all of you.

It was actually a very good week for game playing for me.

#The Castles of Burgundy: 20th Anniversary Edition first game played on game night with only one person able to come.  This was the second time we've played this and two months apart.  It took a little while to review, but we sure enjoyed the game.

#Hadrian's Wall this was our second game for game night, and my first time playing with someone else.  It took about 15 minutes to explain the two sheets after setting up, but we got in to it.  Made a mistake understanding the scoring of end-of-year attacks so our final scores were skewed a little high, but a great game.  It took us over two hours to play (my friend can sometimes over analyze), but I'll never complain about playing this past midnight!

#Paladins of the West Kingdom first time playing this in five months. I very much enjoy it and wish I could get it to the table more.  And someday I'll get to play it with someone else.

#Hadrian's Wall my third time playing this since Christmas

#Rolling Realms I really like these dice- the size, the color. They're just nice.  Interesting game.  This was my first play and I liked using different boards during the game to get points.  I'll have to get some more plays in to know what I really think of it.

#The Quacks of Quedlinburg has been a recent hotness for our family. We love it. Quick to play and different every time. Might have to add an expansion and some upgrades bits.

also started the campaign for#Charterstone. First game down. Really love the cute art and the game is smooth. Can't wait to explore more of it.

Charterstone didn't work for my one group as we only got about 4 plays in before we abandoned it.  I think part of the issue is related to the group though as we haven't been able to complete any legacy style games yet including MyCity and Clank Legacy.

I can see that. If you go in expecting#Pandemic Legacy: Season 1 you will not be fulfilled. However we are happy with the result from the first game. Different. Interesting. We will stick with it. Agree that it is group dependent for sure.

I was feeling pretty sick this week so a lot fewer plays overall:

hope you get well soon

Thanks!  I think I am nearly out of the worst