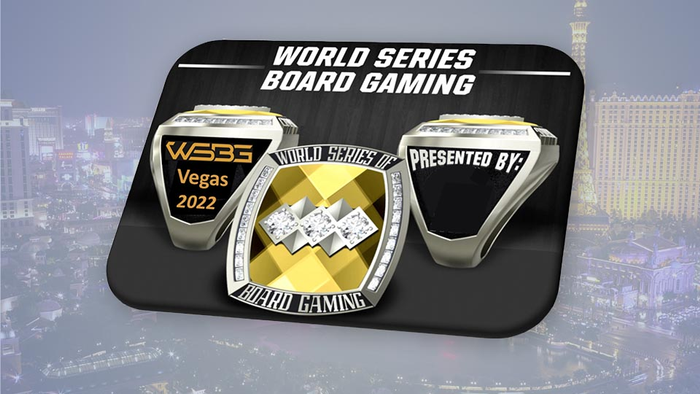 The very first thing that kicked off the Dice Tower Autumn Spectacular was an announcement of a big and first-of-its-kind event that is coming. It was announced that in Las Vegas next year, September 28th through October 2nd, there will be the first-ever WORLD SERIES OF BOARD GAMING with gold championship rings and a grand prize of $25,000! In addition, to the announcement via Dice Tower, additional information from PR director Brian Muller in this original Board Game Halv article.

Over the first four days will be preliminary "ring rounds" of 16 different games that will be announced by different board game personalities over the month of October (list below will be updated as they are announced). Two games on 9/28, 4 games on 9/29, 5 games on 9/30 and 5 games on 10/1 that will have several rounds. The winner of each will not only advance to the semi-finals, but they will take home a championship ring! You can play in up to four of these ring rounds, a maximum of one per day.

The finals will take place on Sunday, October 2, 2022. 16 players will be split into 4 games, all of which they hadn't played in the initial ring rounds (there will be a drawing, as well as, a veto system). This will result in a 4 player final game that will again be a new game from the 16 that no one played and that will determine the ultimate winner that will take home the $25k and a $3k championship bracelet. Second place will get $10k and third place will take home $5k.

There is will also be the whole convention experience with an exhibitor hall and side-events! Pricing and more details are still to come...

MORE INFO ON THE EVENT:

Check out the official World Series of Board Games Las Vegas Page: https://www.wsbgchampionship.com/

I will list the games here as they get announced throughout the coming weeks:

My question is are they going to be the gold standard general classics like #Splendor, #Catan, #Carcassonne, etc. Or is it going to be new hot stuff like #Dinosaur World, #Furnace, etc? At least I know there will be no cooperative games...

Haha, nailed it! I guess we are just waiting to see what new games are on the list.

Looks like you made some good guesses! It is great to see so many of the iconic staples like #Splendor, #Catan and #Carcassonne on the list!

Yes, Dune: Imperium, I am in!! I like this mix so far. I have to assume that #Carcassonne and #Catan are going to be on this list.

Looks like you were absolutely right. Couldn't have had a proper world series without those two!

This is a pretty cool announcement.  I doubt I can get the wife to let me go to Vegas for a 2nd time next year  (I usually go for March Madness) but I hope the event turns out well and they continue it into the future.

Yea, I would like to see how year 1 goes anyway. Could be amazing or could be a complete mess, but why not wait a bit and let them get the kinks out.

I was able to speak with Brian Muller, Director of Public Relations at the World Series of Board Gaming and got some new information. Here are some key takeaways:

This sounds great! I love that board games are growing in this way.

#Brass: Birmingham is a absolute favorite of mine but games take so long! I don't know how they are going to have a full ring event of that one in a day when you compare it to some of the others on the list like #Carcassonne and #Splendor!

Looks like #Blood Rage is going to be one of the games. During one of the Dice Tower Autumn Spectacular videos coming up (https://www.youtube.com/watch?v=TQK_SmNbrSc), the description says that they are giving away two entries to the event worth $250 each that can be used for any game "not just Blood Rage".

I am glad it is not going to be all new games.

Since it looks like there is still going to be a game that was published this year and it has to accomodate 3 and 4 people, I am saying #Cubitos!

Post what ever is new and exciting in board games here.