Sandy is a prolific game designer with an impressive track record. His fingerprints are all over household names such as Doom and Age of Empires, and his dedication to Lovecraftian horror has not only produced the wildly successful Cthulhu Wars, but also led the late author H. P. Lovecraft out of obscurity.

Hey Sandy, thank you for making your time! First up, could you tell us a bit about yourself?

I live in Texas, with my wife of 40 years and two mongrel dogs. The only full-time jobs I’ve ever had as an adult had to do with game design. I’m an active member of the Church of Jesus Christ of Latter-day Saints. My favorite food is lobster.

For those who might not be aware, what are some notable games you have worked on?

The Call of Cthulhu RPG, also the first Lovecraft game. I was chief developer on Richard Launius’s Arkham Horror. In the digital field, I worked on Doom, Doom 2, Quake, and the entire Age of Empires series. I also contributed to the original Civilization computer game. Since founding my own game company, I’ve published several successful games. The best known is Cthulhu Wars.

With only 10 weeks left before the 1993 release of Doom, you joined id Software and designed 19 of the levels. First, could you share with us the story behind how you joined the team at such a strange timing? Second, what aspects of level design do you learn to prioritize vs. sacrifice when you're in such a time crunch?

Well I can’t speak to why id Software wanted to hire a new designer and give him so many of the levels, but it might be because they were already planning to pay off Tom Hall, and I was the intended replacement. I had never designed a 3D level before of course so had no idea what to focus on. Turned out my solution was to (1) think of a theme. (2) Expand and iterate. For example—the idea behind E3M4 “House of Pain” was for the early part to resemble a human viscera—lungs, stomach, etc. E2M2 was a warehouse. Then I’d play through the level again and again, adding sections sequentially, until I felt it was “long enough”. I also had (and still have) a habit of incorporating my nightmares as inspiration. Several levels are straight from my dreams.

I’m keenly interested in having a strong backstory in my products. I often have lots of subtleties and odd tidbits based on same. For example, my Dire Nodens figure has a prosthetic claw, because “Nodens” is connected to the celtic “Nuada of the Silver Hand”. But I’m not interested in the story being overtly told, necessarily. Unless it needs it, as in Call of Cthulhu. In another example, the fictional world of Glorantha is full of stories, which my game The Gods War permits you to recreate. Fans of the world will see where I’ve reflected these myths. But nowhere do I force them in the player.

Before we talk about some of your recent games, I just have a few more questions: In 2013, you received the "Howie" award for Lifetime Achievement and contributions to the Lovecraftian genre. When/how did you become a fan of H. P. Lovecraft and what about his work fascinates you? For anyone unfamiliar with this genre, could you describe the core elements they would find in a Lovecraftian game?

I read my first two Lovecraft tales at the age of 8. They were The Outsider & Pickman’s Model (not sure which order). I had never read anything like it. To this day, what rivets me to Lovecraft is how intricately he puts together his tale, how alien his creatures are, and how incredibly he pushes his ideas? A whole town of monsters? A sentient color? A guy who has sex with a gorilla? It’s all in Lovecraft. The core elements in a properly Lovecraft game are: (1) The concept that humans are limited and unimportant. (2) The concept that true horror comes from Beyond—outer space, other dimensions, the distant past. (3) A materialistic view of the universe. Lovecraft’s cults never have a real theology - always there is some tangible benefit from worship.

Cthulhu seems to have entered the mainstream culture in the recent years (there are currently 448 projects on Kickstarter with the keyword "Cthulhu"). Would you agree with this and if so, how would you explain the sudden popularity and what appears to be society's growing openness and interest toward this genre?

When I won my Howie, the MC explained that in 1980, Lovecraft was pathetically obscure, which I knew. Everyone I knew personally who knew of Lovecraft had learned of him through me. In 1981, Call of Cthulhu, the RPG, appeared, and began seeping through gamer nerd culture. Dozens of expansions followed. Thousands have told me they read HPL because of my game. In 1985, Stuart Gordon released Re-Animator, then From Beyond - the first actually good HPL films. These, then, began influencing horror nerd culture. Moving in both directions, the lore of Lovecraft spread and spread. Also in the same time frame, S.T.Joshi’s analyses of HPL started making being a fan defensible intellectually.

Your Kickstarter for Cthulhu Wars was a smashing success with over $1.4M raised. Did you anticipate this level of support from the beginning? To what do you attribute its success?

I expected and hoped for about 200-300k. I think it succeeded because of three factors. (1) My name, to be blunt. I am a fairly well-liked designer with a resume as long as your arm. And I’m closely associated with Lovecraft. (2) The amazing art quality. We walked the walk. (3) It was one of the first “Luxury” games. First-rate price, add-ons, quality, figures, etc. While not every game should be a $175 behemoth, it’s also ok for you to have at least one “Cadillac” on your shelf, instead of just a string of Honda Civics.

Are there any tough problems you have to deal with when a project becomes "too successful"?How do you deal with the pressure of needing to produce another hit?

Yes. I have a game night every Saturday. I take care to periodically unwind. My most important support system is my angel wife.

Your latest project is called the "Eternal Adversary". Could you give us a short overview of the game?

It’s a light, short battle game incorporating character advancement, about a war between Order and Chaos. There are two teams. Order are heroes from alternate timelines, such as a universe where the Aztec Empire survived to modern times. Chaos are legends from many continent: the Kelpie, Ghoul, Kappa, etc. The teams have different tasks, and different fundamentals—beyond mere game flavor.

What was your inspiration behind the game's design and theme? Are you on the side of ORDER or CHAOS?

Well actually the game’s initial concepts came from Ben Donges, and my son Lincoln did much of the development. So I can only take 30-40% of the credit. I guess I fight for Chaos because originally the game was a co-op in which all players fought for Order, and we added a playable Chaos.

Every hero and monster has such a unique background/lore. How much time do you invest for worldbuilding to make a believable story of conflict?

I read a lot, mostly non-fiction, and watch eclectic movies, so a huge store of esoteric, nominally useless lore is in my head. While I do look up stuff when I need to, mostly the background ideas I want are there. Also for Eternal Adversary a lot of the legwork was done by my co-developers.

Which part of this game's development process was your favorite and how come?

Sitting down with my son Lincoln and hammering out the most difficult design concepts. How should dice work? What should monsters do? How do heroes advance? These took hours of back and forth creative debate and was really productive.

What do you think are some of the most memorable/fun moments players will have with this game?

Well, some such moments we’ve had so far were: failing to find a single Healing Shrine throughout the game and still (barely) pulling off a win; ending the game by killing the arch evil with only one remaining hero with 1 HP left; summoning three Erinyes in a row and completely surrounding an oblivious Order hero who was focused on closing a Rift and didn’t notice what was happening.

What do you think is a good mark of success and what sort of milestone would you like to achieve in the near future?

The most basic level is I must earn enough cash to keep Petersen Games afloat. Three of my future goals are to produce a successful game without Kickstarting it, to do a successful non-figure game, and to do someday a classic war game. All are in the works.

And lastly, what is your dream project?

My ultimate dream project was Cthulhu Wars. Not sure if that makes me a success or a has-been. I also am quite proud of Planet Apocalypse, Hyperspace, and The Gods War. I guess every project is my dream project while I’m working towards it.

Thank you Sandy for making your time!

Readers, please feel free to leave comments/questions below for Sandy, any of the games mentioned, or for myself!

Below are my links to past interviews:

Have you ever played any board games by Sandy Petersen? Anything worth recommending?

Today’s article takes a look at Eternal Adversary, a new title from Petersen. You can read it here https://kick.agency/news/eternal-adversary-sandy-petersen/ if you want.

I actually haven't played any of his games, but Glorantha: The Gods War sparks my interest. And thanks for the link! Great for the readers to have more in-depth coverage of his latest kickstarter 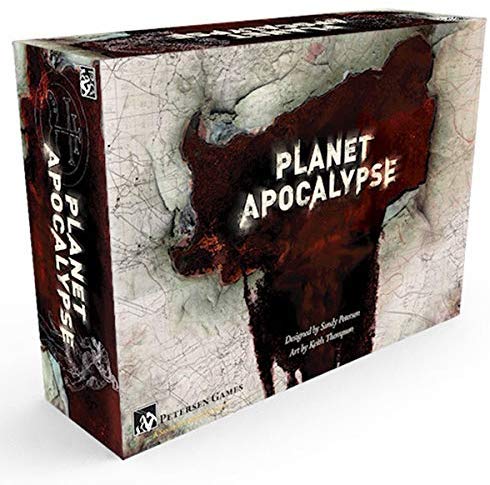 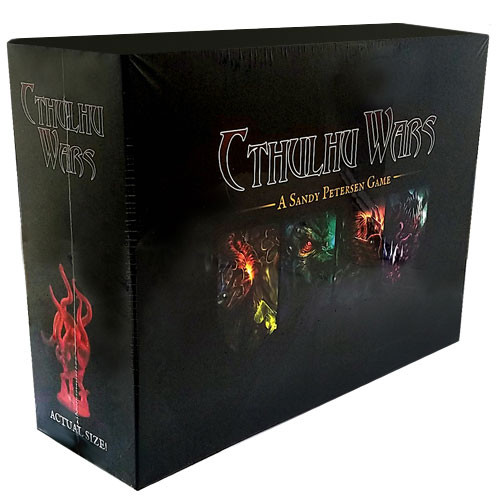 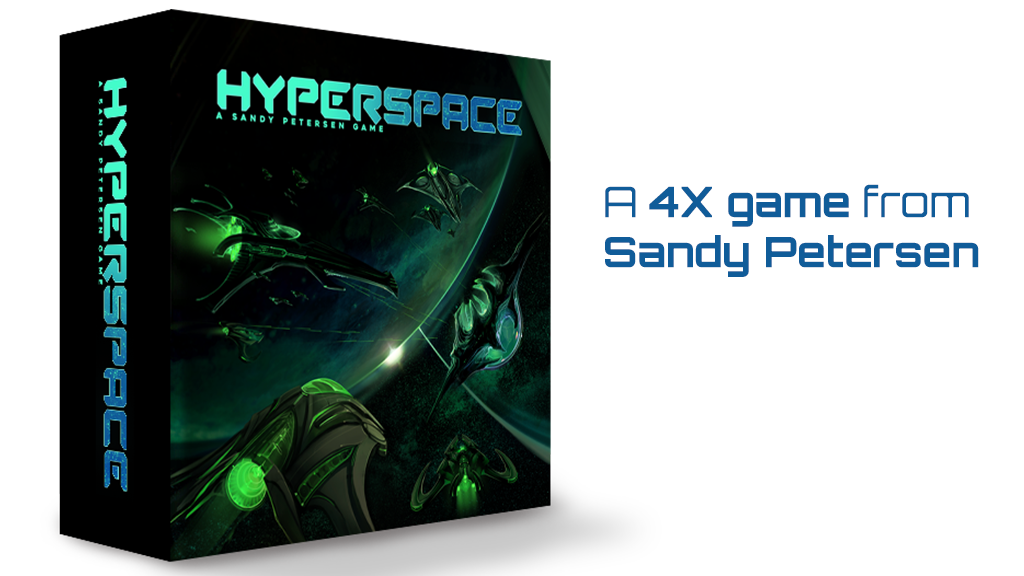 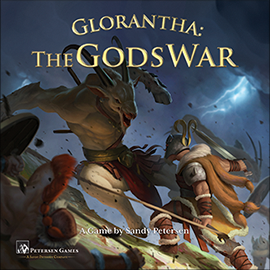 This topic has all the interviews done by Board Game Atlas.