The Ultimate Guide to Alchemy, Crafting & Enchanting is a rules-lite crafting system for GMs and players looking for ways to craft items and increase the creativity in your games. It introduces a brand new game mechanic for creating items, potions, and magical goods in 5E. Tinctures and elixirs, weapons, armor, and tools are all possible with this guide.

You can get a PDF of The Ultimate Guide for $20, a hardcover book for $40, or both for only $50. If you're looking to enhance your game with guilds, magic items, and quests, check out the campaign before it ends on Thursday, February 27, 2020.

About The Ultimate Guide

The Ultimate Guide contains a chapter for each creative discipline:

To pursue alchemy, crafting, or enchanting, your character will join that discipline’s Crafting Association, which grants them certain benefits and advantages. There are also options to play without the association system if you prefer a simpler or more streamlined game.

Following the chapters for the creative disciplines is a massive collection of magical and mundane items that can be made and used in your games. Over 200 magic items can be found in the Magic Item Compendium, with vivid color illustrations. These magic items can be purchased separately from the book in one of four Magic Item Decks for easy use in-game:

and one pre-written quest hook for each of the existing 12 specializations is included in each of:

You can also select an Enchanter, Alchemist, or Crafter Player Pad, exclusive from Dog Might Games. They have etched acrylic and are dry erasable.

Looking for even more premium accessories from Dog Might? The Alchemist's Stained Valhalla Screen, in 3D wood, is a real show-stopper.

Stretch goals are still being unlocked and there's a ton more to see, so be sure to check out the Kickstarter before it ends on Thursday, February 27, 2020.

I am not into this sort of thing. But I do think the screen looks really cool.

The carved screen is really solid wood. There's a shot from the back on the KS page. 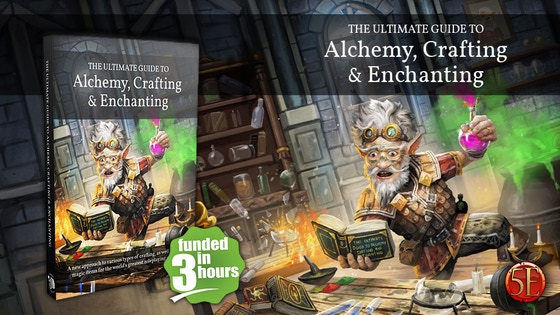