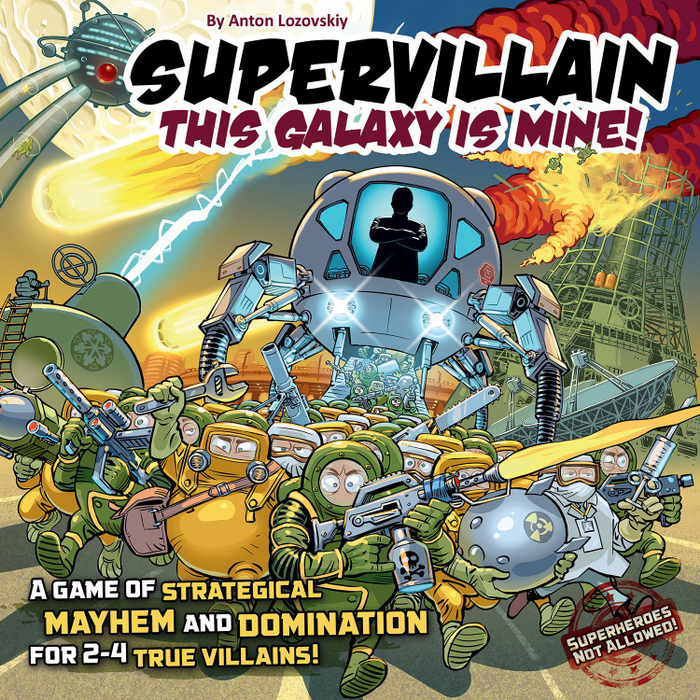 I picked this game up on eBay pretty cheaply with a bunch of expansions included, I enjoyed the whimsical artwork and thought it would make a nice medium length game. However, after I read through the rules and flicked through the cards it ended up on my shelf unplayed for a good few months. In my defence I did take it along to my games club on a number of occaisions but it never really had any takers, they tend towards Medium-Heavy Euro games, and it tends to be one 90+ minute  game we play of an evening rather than multiple shorter ones.

However, a couple of weeks before lockdown, we had a day of gaming and I managed to get this one onto a table as a lighter game between thinkier ones.

In supervillain you take on the role of the leader of a comic book style mad genius, your goal is to build four points worth of evil bases and as such claim you place as the most super of all the supervillains. 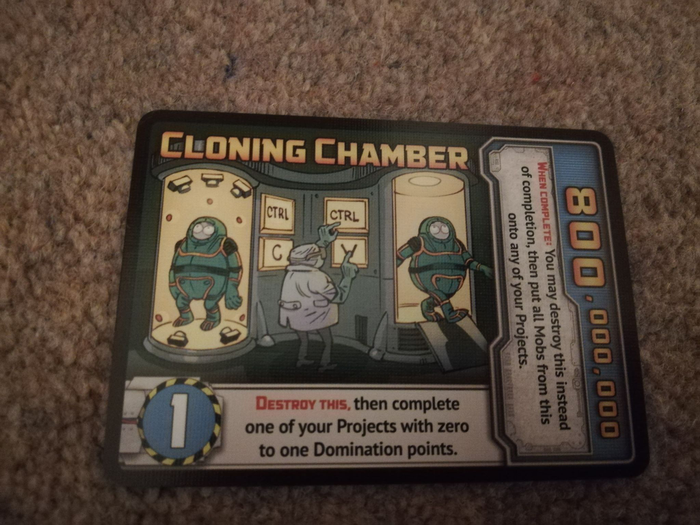 You draw a new base every turn, and you can do one of two things:

First you can play it down in front of you to start 'construction'. You build a base by playing minion cards of total value (in the above case 800,000,000) onto the card, at which point you get the 'when complete' bonus (sometimes other triggers) and turn it sideways,  Which will usually either give you a passive ability or a one time use like the above card as well as the all important points. The second option I will come to in a bit.

So far so easy, you draw one new minion card automatically every turn: 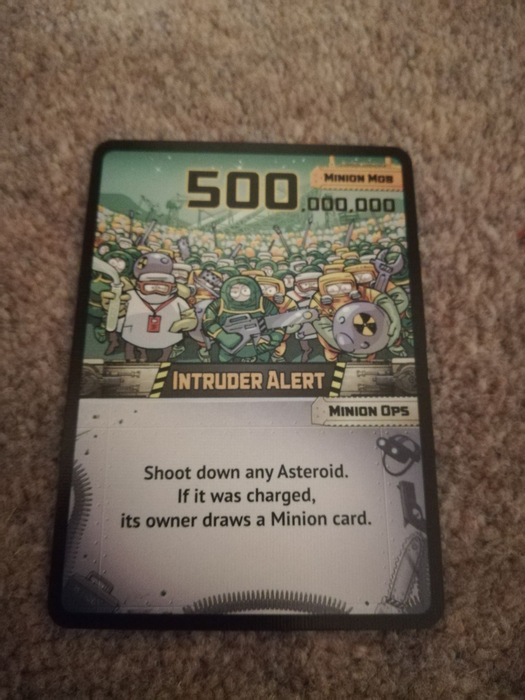 Each card has two uses: the top half is used to build your bases, it will usually take 2-4 'minion mobs' to build a base and you can generally only play one minion as a 'minion mob' a turn.

You can also play one minion as a 'minion ops' which just does whatever it says on the card.

However, as you usually can't finish your bases on the turn you play them they remain very vulnerable (completed bases are hard to kill) to the other players: how can they stop you I hear you ask? 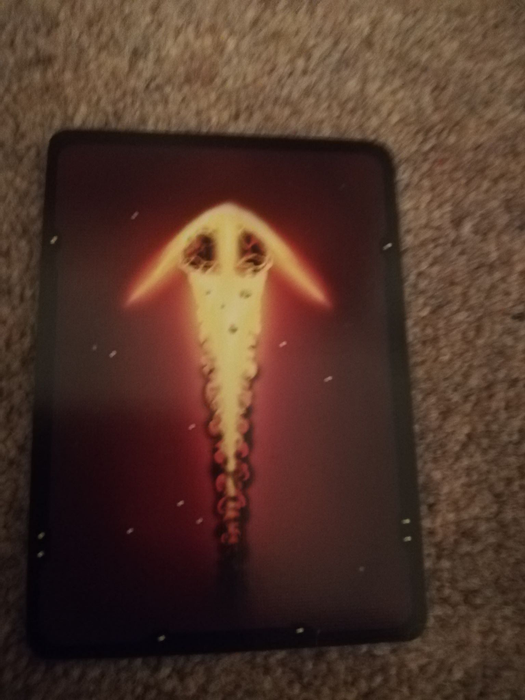 With friggin' asteroids! This is what I think sets Supervillain apart from other light card games, the 'take that' aspect is baked into the game and also benefits you, I will explain.

When you draw a base each turn, you can either add it to your hand (ready to be played) OR you can play it face down as an asteroid. When you do this, you point it at another player and let fly, it does nothing this turn (space is very big) but on your next turn if your opponent hasn't shot it down, two things happen: First you can either blow up a minion card of your choice on a base being constructed, or blow up a base without any minions. This is slightly friendlier than some games, as it gives other players a chance to respond (they can blow up asteroids or shield their bases, but both of these will cost cards). The second thing to happen is every asteroid that hits allows you to draw an extra card yourself: this for a genius mechanic in my mind as in a lot of these card games ( #Unstable Unicorns Base Game for example) any actions you use to harm an opponent often just give your other opponents an advantage as they only hurt the other player and don't benefit you in any way. As such the 'best' tactic is everyone just racing to complete whatever objective they can and hope get their first and anyone who tries to slow down the leade is also setting themselves back too. However, in this game you can't possible build all the bases you draw so it makes sense to use the ones that are less appealing to launch asteroids as it both gives you extra cards (which you desperately need) and slows down your opponents. As such, everyone does this and there are asteroids flying all over the place, which is just great fun.

There is more to the game and it is slightly heavier than you average card based filler but it has charming theme and a lot of fun abilities that keep it feeling fresh. I played it both 4P and ten 2P with my partner and it is a LOT better with more as you might expect. I haven't played any of the expansions yet, but once I can meet up with friends again I surely will. 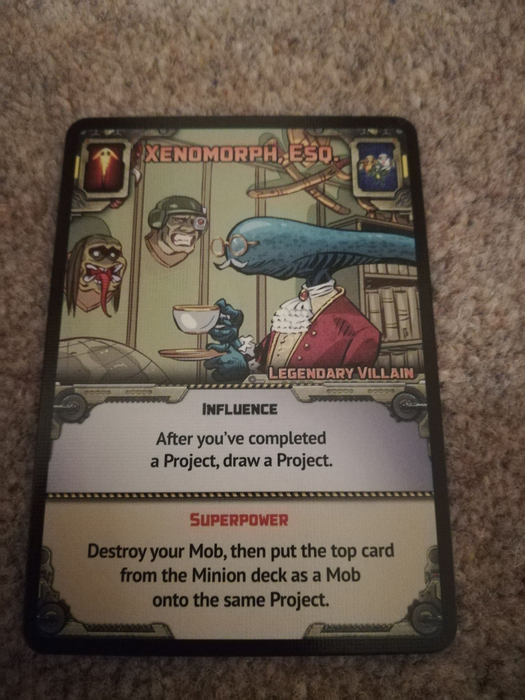 This does look cute, and, I had never heard of it before this writeup.

I hadn't heard of it, but I think I got the base game with all the expansions for about £6 so thought it was worth a punt!

That does sound cheap.

For sure, it was in my phase of grabbing anything interesting that I could get a good deal on, helped me get a feel for what I enjoyed/didn't at probably average 1/8th the cost of buying new. Also led to playing a bunch of games that don't get any attention/I would never hear if otherwise which has led to some surprise gems.

I will still grab about anything if I see it at that sort of price.

I have slowed down a little and tried to focus in on being patient for games I really want to pop up cheaply. As I don't want my collection to get out of hand, especially as we still rent so moving all the games will be a challenge 😅

Ooof, I hear that. I hate moving anything, including games.